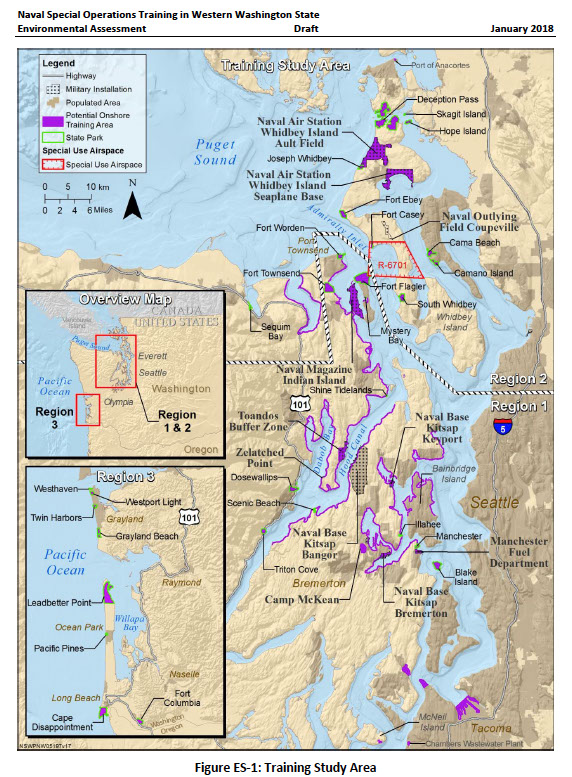 The Navy is proposing special operations warfare training along 265 miles of Washington state shorelines and 65 state parks at launching sites, marinas, and within cities and towns.

Although the Navy has conducted SEAL training in the Northwest for the past 30 years, it intends to significantly expand operations well beyond what has been conducted in the past without providing a comprehensive environmental impact statement.

According to the Navy’s Draft Environmental Assessment, “The Proposed Action supports small-unit, intermediate and advanced cold-water maritime and land-based training activities for naval special operations personnel on selected nearshore lands and in the inland waters of Puget Sound, including Hood Canal, as well as the southwestern Washington coast. Training would start in 2018 and occur into the foreseeable future.”

The specific, long-term environmental consequences of innumerable military assault exercises to each of the public and private shoreline areas is not addressed in the Navy’s assessment.

The actual number of military personnel involved in the training exercises is also uncertain. The EA states 84 individuals will take part, but the number discussed during the Navy’s “open house” events was 504. An email from Washington State Governor Inslee’s office expressed concern about possibly more than 2,000. These trainees would be:

• Moving on foot over the beach

A March 2015 video of a presentation by the Special Operations Command to the Big Spring City Council in Bastrop, Texas, explains in detail the concept and procedures of conducting “realistic military training”: https://www.youtube.com/watch?v=dLM4-aImMkY&t=12m35s

Navy special operations soldiers with "simulated" weapons would attempt to hide from civilians for exercises lasting as long as three days at a time.  Citizens using state parks, public beaches and marinas, and carrying out their daily lives in communities adjacent to marine areas would be considered “the enemy”, as the military’s object is to be able to pursue stealth activities without being observed. The possibility of inadvertent confrontations between the unsuspecting public and armed soldiers could create dangerous situations. As was mentioned in the Navy's EA, "children could be startled". [See Army's Reality Game Takes a Deadly Turn http://articles.latimes.com/2002/feb/27/news/mn-30109.]

The Navy has not done a sufficient job of evaluating the potential degradation of our fragile shorelines ecosystem, the economic impacts of impeding the public’s use of state parks, and the irreparable damage to the public’s trust in the military.

Comments, including a demand for a comprehensive environmental impact statement, should be sent to